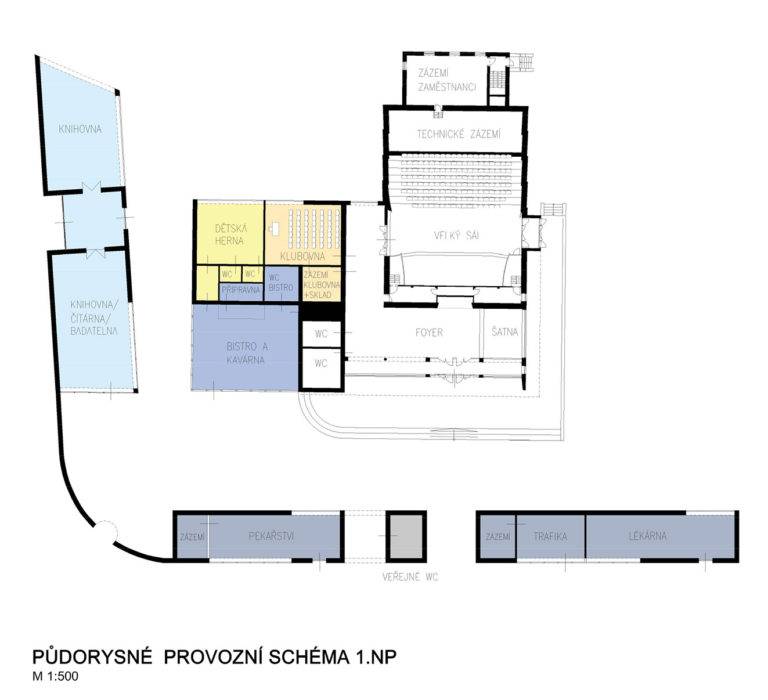 From an urban planning point of view, the design was intended to create a compact unit of buildings that will have a function focused on cultural and social activities (multifunctional hall for cinema, theater, lectures etc.), associated with a clubhouse, playroom for children and bistro-café. The separate library building, along Plzeňská Street, is connected only visually by shielding elements at the roof level of the bistro and games room. The raised platform in front of the cinema has been partially retained and is part of the quiet, internal public space and transitions to the ground floor by three steps. Steps have been added at the entrance to the cinema and disabled access to the foyer of the multi-purpose hall will also be added.

come and meet us

GDPR
made by Idealab

You can find out more about which cookies we are using or switch them off in settings.

come and meet us

I WANT TO BE PART OF THE TEAM

This website uses cookies so that we can provide you with the best user experience possible. Cookie information is stored in your browser and performs functions such as recognising you when you return to our website and helping our team to understand which sections of the website you find most interesting and useful.

Strictly Necessary Cookie should be enabled at all times so that we can save your preferences for cookie settings.

If you disable this cookie, we will not be able to save your preferences. This means that every time you visit this website you will need to enable or disable cookies again.